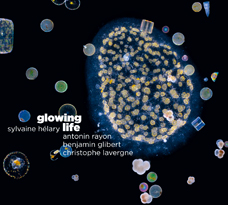 Sylvaine Hélary’s new quartet explores a more electric branch of her work as a composer, creating here heady melodies, romantic sizzles, amplified rhythmic hordes and waves of misty ritornelles. Each piece thus collected, like timeless portraits of imaginary characters and situations, leaves in its wake the traces of a captivating soundtrack. The legacy of ancient legends (Henry Cow, Robert Wyatt, Arto Lindsay, Stereolab) rubs shoulders with the emergence of a world of astonishing dimensions, where the outlines of a singular soundscape are drawn, reflecting various and complementary expressions of the four musical personalities involved who express themselves with joyful freedom. Acting as a bridge between the very English "Canterbury" scene, contemporary jazz and experimental pop, this group produces the sound of a life in scintillating and phosphorescent colors, a refreshing and bewitching "Glowing Life" promising bright futures.