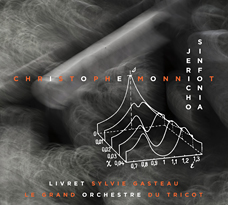 This recording is a real novelty. Not only chronologically. This is a novelty in the purest sense, in the sense of a genuine rarity.
Here Christophe Monniot tries and succeeds in what has been little attempted in recent years in the world of jazz. What does this singularity consist of? We can mention three aspects that characterize it: a concept album, very rich materials and the spiritual dimension.
Inspired by an inner necessity, Christophe Monniot and his collaborators have elaborated a very personal music, even revolutionary, and as such disturbing. It is a music that resists its own reification, it refuses to be an object and presents itself to us as a subject. It engages in an interaction, it solicits an answer and constitutes, by this personal challenge and this respect of the listener, a prophetic and essential voice in jazz today.
(from Michel Petrossian’s liner notes)