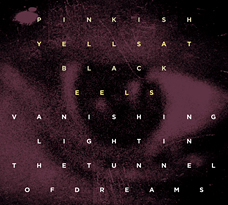 1. Meditation
2. Slow Cascade of Tears
3. Heatstroke Mirage
4. Vanishing Light in the Tunnel of Dreams
5. The Sorrow of Guernica
Total time: 52'36

Since the early 2000’s, all personalities involved in both Yells At Eels and Pinkish Black have shared an elevated respect and admiration with one another. The idea of an eventual live and studio collaboration between the two long running musical projects finally came together after many years of discussing it in passing. [...] (For this recording,) we came together with hearts full of both beaming love and bludgeoning despair to make this piece of music. A meditation amongst brothers. A soundtrack of nightmares, of beauty, and of perseverance.
( from Stefan González's liner notes )