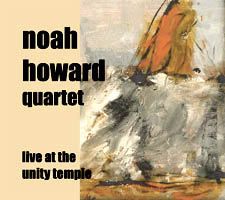 Recorded in concert at the Unity Temple, Chicago,
Illinois, on September 9, 1997.
Cover painting by Åke Bjurhamn.
SOLD OUT. Available as a digital release.

This is the first release for Ayler Records and includes the legendary duo Noah Howard and Bobby Few well known from Frank Wright's various groups. All three are influenced by playing with Albert Ayler in the 60's and have been part of shaping the free jazz. Noah's recording from 1969; “The Black Ark” has turned out to be a classic in the history of free jazz. The music on this CD is composed by Noah Howard and compositions like “The Blessing” and “Schizophrenic Blues” are known from previous recordings with Noah Howard. The quartet is very tight after playing together for a long time.