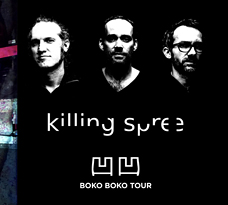 Three years after the release of their debut album (aylCD-143) on Ayler Records, the 'avant-jazz-metal' Killing Spree trio of Matthieu Metzger, Grégoire Galichet and Sylvain Daniel embarked for a tour around Japan.
It seemed a good idea to record some of the dates and offer you the opportunity to experience the power and intensity that the trio carries on stage, and shade new light on the band’s compositions and improvisations.

Thus, here it is: a live recording of the band’s repertoire. Enjoy!