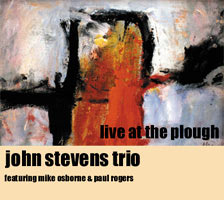 John Stevens formed many different groups and performed at the small pub “The Plough”, south of London in the years around 1980. That evening John was joined by alto saxophonist Mike Osborne and bassist Paul Rogers. John Stevens was a master drummer and it is a thrill to listen to him throughout the whole of this recording. Mike Osborne is at his best. It seems that he has an endless number of ideas for building up his improvisations. Paul Rogers was very young here but was already discovered by the masters and he is today a well-established artist.